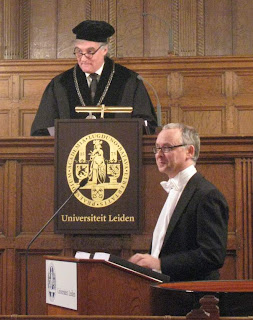 On December 22, 2009, I received my doctoral degree from Leiden University (LU). It was their last promotion of that year, and I became the first doctor in the arts to graduate at this old institution.

LU was founded in 1575 as a gift to the city of Leiden by Willem I, Prince of Orange, the main leader of the Dutch uprise against the ruling Spanish. According to legend, the citizens could choose between 10 years of tax free life or a university as the reward for their brave resistance against the Spanish. The university’s motto is Praesidium Libertatis, “a firm fundament of freedom” in the words of Willem of Orange. The university was financed with the selling of confiscated properties of the catholic church. Philip II, then still King of the Netherlands, declared in 1582 that anyone who studied at the university would be suspected of herecy and not authorised to perform in a function of any dignity.

I like the idea of having graduated at this university. For one thing, the spirit of secular freedom suits me, being from the Flemish city of Ghent, which prides itself of a similar history. Ghent citizens had also stubornly resisted the Spanish in those days, refusing to pay taxes to Charles V. To punish Ghent, the emperor humiliated its nobility in 1539 by ordering them to wear nooses around their necks. Since then, the noose has become the Ghent symbol for proud resistance to tiranny and freedom of opinion. Secondly, I like the Dutch. For the past 16 years, I have organised new music concerts in Flanders and the Netherlands in order to exchange Dutch and Flemish musicians and composers. It feels like a curious coincidence that I, with my Flemish background, graduated at a Dutch university through a colaborative effort of Dutch and Flemish institutions. (The trajectory towards the degree was set up by the Academy for Performing Arts of LU (part of the Humanities Faculty), the Orpheus Institute (Ghent), the Royal Conservatory in The Hague, the conservatory of Amsterdam and the Lemmens Institute in Leuven.)

The network of institutions that joined forces for this curriculum is as dinstinguished as the lineage of graduates at LU, among which are listed four Nobel Prize winners. I don’t consider myself a high-end part of that lineage, but the history of LU, and the level at which it is used to operate, is reflected in all aspects of their doctoral promotion ritual. My opposition committee consisted of both the present and former Rector Magnificus of LU, the dean of its Humanities faculty and their professors of Literary Studies and Art History; icons from the musical performance scene like Ton Koopman, Reinbert de Leeuw, Ellen Corver and Bart van Oort; representatives of Amsterdam College for the Arts, the Orpheus Institute, Lemmens Institute and the rector of the Catholic University Leuven; David Rowland (Dean and Director of Studies for the Faculty of Arts, OU Cambridge) and Herman Sabbe (University of Ghent). And, of course, my promotor Frans De Ruiter, founder of the festival for ancient music (Utrecht), director of the Holland Festival, director of the Royal Conservatory of The Hague, and co-conceiver of the Academy for Performing Arts at LU, where I was enrolled as a doctoral student. 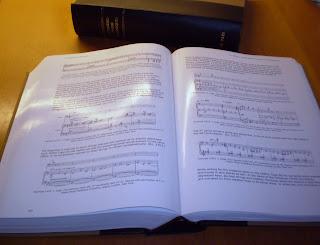 Contrary to the regular academic doctoral promotion, artistic promovendi have to defend their findings through an artistic presentation as well as a dissertation. For my subject - Extended Piano Techniques in Theory, History and Performance Practice - I set up three concerts, all presented in the days before the promotion, with solo and chamber music (including some of the original dances to the prepared piano pieces by John Cage) from the early 1700’s to the present day, for the pianoforte, harpsichord, clavichord, organ and contemporary piano. 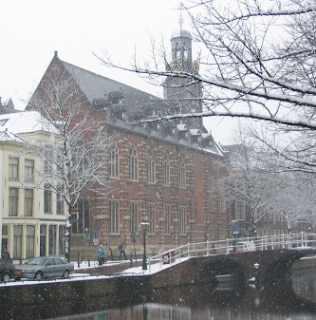 The formal nature of the defense almost ensures that the candidate can have a good time. Once the date for the promotion is set, there is no real fear of failing. Nevertheless, to test the candidate’s ability to hold ground and stand by the conclusions that are formulated in the dissertation, the questions from the opposition committee may be sharp and charging. Historically, at least, the presence of paranymfs seems clearly not to have always been comforting enough, for the ‘waiting’ room, where the academic promovendi are left to calm their nerves before entering the arena, became known as the ‘sweat chamber’. I didn't get to add my signature to the walls of that room, as had the Dutch Queen and other famous Leiden graduates, but I did get some nasty questions from members of the opposition committee who did not aggree with all aspects of my research. I don't know if my confidence came from a musician's stage experience or if it had anything to do with my decendance from proud Ghent noose-wearers, but the attacks couldn't throw me off. The whole promotion was just too much fun. 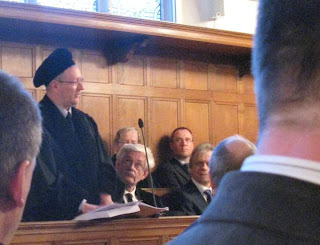 After exactly 45 minutes (exceptionally it can be 60’) before the chief of protocol enters the auditorium and cries out “Hora Est!” Even if the candidate is in the middle of his explanation, or one of the opposition committee in the middle of a question, the defense comes to a stop and the committee retires for deliberation. During that time, the candidate can be at ease with his two paranymfs. Those are a peculiarity of LU’s promotion procedure. Legend has it that they were originally intended to protect the candidate in case of all too severe arguments from the opposition committee. Later, their function shifted from bodyguard to elegant (female) assistants. I liked the older concept and assigned my two oldest (and bearded) friends Geert and Alfonso to the task.

The Academy building houses the auditorium where doctoral promotions are held almost daily. The whole ritual is highly formalized. Right before the defense, the candidate – in concert dress – is led into a little office where the nomenclature is explained to him by the chief of protocol. When answering questions, the promovendus is to address the members of his opposition committee as “highly learned opponent” (when it is a professor), as “very learned opponent” (when it is not a professor), as “highly esteemed promotor” or as “Mister Rector Magnificus”. The promovendus himself is addressed as “Mister Candidate”. The opposition committee are dressed in traditional gowns with an accompanying hat that needs to be put on when speaking.

The promotion itself took place in the old Academy building, the main university edifice since 1581. It used to house the oldest university observatory, and right next to the building booksellers and printers were housed, among them Isaac Elzevier, whose name was later used for the well-known publishing company.
Posted by luk at 2:33 PM