The Orpheus Institute, where I coordinate the DocARTES curriculum and where I am a fellow at the Orpheus Research Center in Music (ORCiM), has just had its second incarnation of its Research Festival.
The existing conferences are not always the ideal places to present artistic research: reading an article and perhaps letting the participants listen to a recording or illustrate a little on a nearby piano is rarely enough to adequately convey artistic research results. More problematic still, the conference formats do not attract the peers that artistic researchers are looking for. Recognizing the gap in the dissemination chain, the Orpheus Institute established the first Research Festival (since then copied elsewhere), in which the products of artistic research heard, explained and discussed. 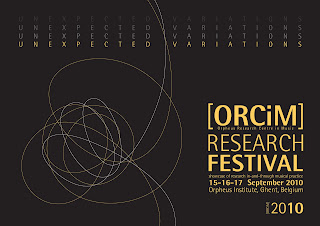 The ORCiM Research Festival 2010 is the second installment of this initiative. Its theme was ‘Unexpected Variations’ and it was handled by a bundle of speakers, many of whom ORCiM members, from often very different perspectives. My most vivid recollection regards what one of the two keynote speakers came from Australia for to show us. Stephen Emmerson “re-imagined” some key piano pieces from the first decade of the previous century by multi-mixing his own recordings, i.e. following up on what Glenn Gould had started in the recording studio by manipulating and mixing microphone perspectives like camera angles in cinema. Emmerson’s transposition of that principle (which Gould can be heard and seen here applying to music by Scriabin) to Schoenberg’s opus 11, Berg’s piano sonata and Bartok’s bagatelles opus 6  may not always result in the most convincing showcases for the potential of this technique, but it remains exciting to think of granting artistic license to recording techniques and taking Gould’s initial experiments one or more steps further.

The CD that was produced to disseminate the findings contains both the original recording and the ‘remix’, including a detailed account of how Emmerson got the idea, contextualized it and realized it. If this project stands for ideals of an artistic research festival, let there be more such events!
Posted by luk at 8:35 AM