The art of Jaso Sasaki’s method

At the 3rd ORCiM festival, I watched Finnish violinist Jaso Sasaki present a research project that looked at first sight as if in danger of being somewhat pointless but ended up fascinating me. For much of the presentation, “Historical recording projects” seemed to be merely about making recordings of early-20th century repertoire with the recording techniques and standards from that era. Jaso let the audience listen and look at the sounds and photographs of himself recording his playing on a stroh-violin into a funnel, using reconstructed fabrication processes and materials to effectively make 78rpm discs and Edison cylinders. But this was not the point. His real aim was to try and reconstruct the performance style of violinists from that period, an interest that is based in general on a wish to find out about the acclaimed ‘golden tone’ of masters like Heifetz and Kreisler (in contrast with the often-stated lack of personal color in present-day violin playing), and in particular on the frustrating lack of recordings of Ysaÿe’s solo violin sonatas, contemporary to the composing of these works. To truly understand what lies behind the old recordings’ typical  sound of frying fish, Jaso believes he must enter the original recording process to experience how its limitations may have been as much part of how we perceive the sweetly nostalgic sound than the actual performance techniques. 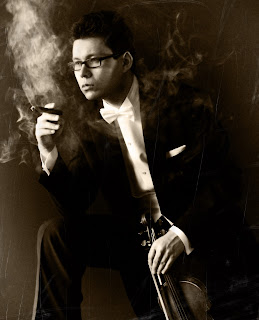 So far, so good, I’d say, even if understand how this is enough to make some (if not many) feel uncomfortable. As far as I am concerned, I do think it worthwhile to investigate this matter thoroughly, rather than getting stuck in the dismissal of any attempt at recreating bygone aesthetics and in the refusal to rethink the value of progress in the development of recording techniques. I’m anticipating how much more we will be able to deepen our understanding of playing post-early music repertoire by way of Jaso’s approach than e.g. the way Krystian Zimmerman had a go at the Chopin piano concertos in 1999. Those discs were revelatory to me when they came out, and I still revel in them, but they were essentially limited to more intuitive and superficial modes of reconstruction than what artistic research à la Jaso's can actually offer. And I am prone to believe that, at some time in the future, we will want to rediscover and reconstruct the clinical 1980’s playing and recording styles. So why not start filling the gaps?

But I felt the urge to post about Jaso for another reason than what’s above. To me, he is a researcher taking contextualization to a new level, one that perhaps only an artist would think of and estimate as being appropriate. Jaso’s publicity picture is styled in a period manner, the cars he likes to restore are classic, he enjoys archery and records in full concert dress. These aspects, put together with the interest in experiencing the old recording sessions, point to the idea that he in fact likes to live the context of his topic. This is the last straw to the academic, of course, and I would agree to a very large extent that living like Heifetz will not make one play like him. To be correct, I don’t even think Jaso likes Aston Martins, smokes cigars and shoots arrows to accomplish the best results in his research. Nevertheless, the general attitude of enjoying ‘live’ immersion in the past may just be what lead him to the best method for this project. Recording the old fashioned way, in all its aspects, is indeed an excellent method to learn about pre-war performance techniques.

More information on Jaso Sasaki and his project will be up soon at his website, including audio clips. At the festival, I found his Interbellum-type rendering of Gounod-Bach’s Ave Maria, normally considered excessive in every artistic aesthetic aspect, thoroughly enjoyable.

This is a modern recording and also his playing is a bit modernized, but I thought it might interest you. Here is Jaso Sasaki playing Kreisler's Preludium&Allegro.