Last week, this CD arrived in the mail: 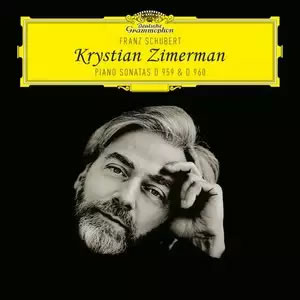 It can be seen as symbolic of today's status of the performer: the pianist's name printed more prominently than the traditionally perceived "owner" of the "works" recorded (who and which seem to have receded into the background), the three half- to full-page photographs of the musician inside the booklet (plus a full page with images of four others of his CDs, which themselves include pictures of Zimerman, and the CD cover copied onto the front page of the booklet), and two more portraits from the same black-and-white shoot included inside the cardboard CD case. Indeed, such a personal visual focus is already more extensive than what, e.g., Herbert von Karajan enjoyed decades ago, as without a doubt the most self-absorbed musician of that time, when this type of marketing started to become part of the professional profiling business of any high-end performer. (Incidentally, Zimerman's Deutsche Grammophon recording of the Grieg and Schumann concertos with the Berlin Philharmonic 'under' Karajan in 1982 had the 'accompanying' soloist, i.e. the conductor, photoshopped in such a way as to keep the pianist in the background. I have always wondered how Zimerman, then still young but more than up-and-coming, had felt about that decision, no doubt taken, or forced, by Karajan himself.)

In the Schubert CD booklet, the composer's signature is the only image related to the man who originally made the sonatas. The two-page interview with the pianist, which replaces the programme notes traditionally written by a musicologist, features a mere six questions, one about Schubert ("He had syphilis, but was he really expecting to die soon?") and the rest about the pianist: why he waited so long with a new solo recording and why he chose these sonatas, why he prefers to use the self-made keyboard, and what particular qualities does the recording hall in Japan offer, and, lastly, "How would you characterize these sonatas?"

This CD is all about Zimerman, and it seems as if it was decided that he, and not Schubert or the two sonatas, would be selling it. It is in the same vein as the apparently unavoidable focus on Yuja Wang's dresses in photographs and interviews. But at least Ms. Wang is an expert on the choice of her clothing; judging his interview, Zimerman could hardly be recognized as an expert on the historical or music theoretical value of Schubert and his compositions, unless he read it somewhere (hopefully written by an expert historian or theorist). Idem for the acoustics of the recording hall - personally, I would have found it interesting to hear from the recording engineer how he managed the sometimes peculiar sound of the CD - and the suggestion that Zimerman designed, manufactured and assembled the keyboard and the hammer action himself. The glaring lack of detail emphasizes the superficiality of the entire interview. Whoever was in power must have deemed it absolutely fine to invest in expensive glossy paper filled with romantically impressionistic pictures rather than enlightening information. Perhaps the DGG offices are still motivated by - as I remember - the unexpected US sales success of Ivo Pogorelich's solo Beethoven-Schumann record in 1982, which was reportedly due to the cover photograph of the pianist being favored especially by female customers (see here for a type of confirmation of this).

Excepting the answers Zimerman gave in the interview, the above criticism may not have much to do with his range of influence in the production. His playing, on the other hand, is actually often very much to my liking. Beyond his technical abilities, which allow him to devise interpretations based solely on their musical merit, it strikes me how he appears to systematically look for pieces in which he can innovate traditional interpretations from a purely pianistic perspective. It was both eye-opening and musically satisfying to hear him play the huge sweep with which the piano part opens the finale of the Rachmaninov's second piano concerto at a speed which is audibly most consistent with the tempo of the movement (at 24'06" in here). Yuja Wang aligns the passage with the orchestra as well, though at a slower metrical ratio (three instead of two bars' worth to arrive back in the bass, see 22'44" in here); Rachmaninov himself (at 21'03" in here) applies an opening rubato to the effect that the sweep takes about four bars. I find Zimerman's entrance to be the most striking one, not because it is the only one I know that follows the composer's notation (though not his recorded performance), and not because of the breathtaking speed (which does not make it sound more "quasi glissando" than Rachmaninov's), but for the way it continues the momentum that the orchestral material created.


In Liszt's Funérailles, the distinction between producing the famous left-hand ostinato with and without the damper pedal is managed by Zimerman with notable consistency. (Listen here, starting at 8'04".) The score prescribes the pedal from bar 115 onwards for an entire bar, or more, at a time - regardless of harmonic changes. The less muddy sound and the lighter action of pianos in Liszt's day allowed for this with more aesthetic comfort than the present-day instruments. The advantage of the damper pedal on a modern piano is that it can disguise the difficulty of clearly and evenly articulating all the notes in the right-hand triplet chords in bar 116 and 118, and that its building up of sound requires less force, and thus less exhaustion, in playing the octaves from bar 133 onwards. The price to pay is that, with lots of pedal, it becomes impossible to distinguish the metrical layers (left-hand triplets, left-hand 'drums' per half note, right-hand quarter note march), to maintain clarity and lightness in the galloping bass triplets and octaves, and to avoid the confusion of having legato and non-legato sounding chords. The ramifications of this are audible in many performances, even of great virtuosos like Martha Argerich (from 6'16" in this video). 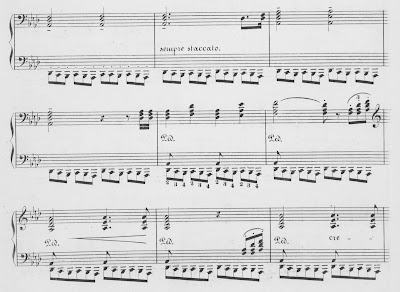 
Not so in Zimerman's version. Until the Allegro energico assai section at bar 143, where no metrical layer or left-hand articulation is endangered, his use of the damper pedal is extremely limited, so that all of the above mentioned details come to the surface. Most excitingly, the rests in the dotted rhythms are now audible (see e.g. bars 141-142), driving the music forward to great effect. 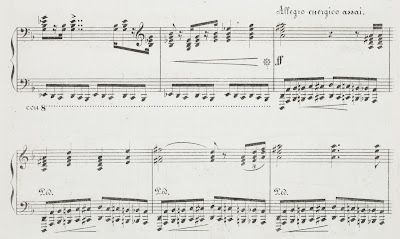 
This is an elegant solution to the problem that using the damper pedal to compensate for technical difficulties can distract from, or even disrupt, the perception of the musical flow when that is composed on the basis of musical structures rather than technical prowess. However, the pianist must be able to pull it off. While Zimerman does so in Funérailles, his approach is less consistent in the two Schubert sonatas he just recorded, where there are comparable pedal vs. no pedal decisions to be taken.


There is more to say about that, but I would prefer to return to it in one of my next posts. More interesting for the argument, here, are the fp octaves that characterize the final movement of D.960, for which Zimerman uses the resonance of a staccato articulation captured with the damper pedal.

It is ironic that this CD highlights the extent to which marketing efforts can take the professional dissemination of musical performance into the foggy field of amateurism, where the means are indistinguishable from the ends, while the experimental nature of the recorded artist's practice, exemplary of the value of the scholarly paradigm shift towards including the study of performance, is blatantly neglected. The trajectory that led from Janet Schmalfeldt's 1985 article, On the Relation of Analysis to Performance, to the present day legitimation of musicians as researchers in-and-through their practice, has run parallel to the recording sector's continuous zooming in on the marketability of performers. These roads would offer more interesting directions if they would intersect more often. Why not ask a musicologist to write a few pages about Schubert and his sonatas, and - leaving out some of the pictures - add a text by (or an interview by another pianist with) Zimmerman on what he was looking for when working out his interpretations? It may not always be easy to cater to layman audiences, who may have less of an interest perhaps in the type of issues discussed above, but there is rather exciting terrain to be cultivated.

As it happens, another new CD arrived on my desk, this week. Again, with some famous early 19th-century solo keyboard sonatas written during a famous composer's late compositional period. 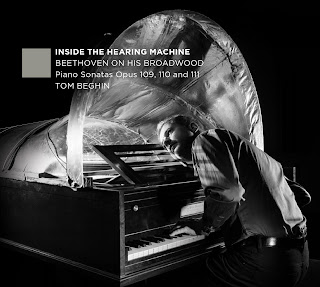 Beethoven's three last piano sonatas are performed on a replica of the composer's  Broadwood piano, made by Chris Maene and "outfitted with a modern-day interpretation of Beethoven’s hearing machine". The pianist is Tom Beghin, also a musician with projects that I always eagerly await, ever since I discovered him on the box with all 32 Beethoven sonatas played on period instruments (see here). As with Zimerman, I don't agree with everything, or I wouldn't play/record all of it in the same way, but, to name just one aspect of Tom's recording, his improvised ornamentation is nothing short of delicious. Some pictures of his adorn the cover and the inside of the booklet, but there is so much more. Four essays deal with the perspectives of those involved in the project: "Beethoven’s Broadwood, Stein’s Hearing Machine, and a Trilogy of Sonatas", "The Deaf Composer and His Broadwood: A Working Relationship", "The Acoustics of Beethoven’s Hearing Machine", "Recording Beethoven’s Broadwood: A Tonmeister’s Perspective"; bonus materials include "Building the Stein/Broadwood Hearing Machine: A First-hand Report from Beethoven’s Conversation Books" and videos that are available on an accompanying website. All was clearly devised to be enjoyed by experts and laymen alike, and a fine balance was found between the diverse elements of the project as well as between the various demands of marketing a CD and demonstrating artistic creativity.