Academy for Music and Theory 2011


The Orpheus Institute’s yearly Academy intends to build bridges between theory and music, the latter meaning the artistic practice. For this year, three scholars were invited to discuss Aspects of Artistic Experimentation in Early Music. Mark Lindley (US), Martin Kirnbauer (CH) and Edward Wickham (UK) worked with a selective international audience of pre- and post-doc theorists, performers and composers. Lindley handled tunings and temperaments in music by Bach and French harpsichordists, Kirnbauer revealed the ins and outs of enharmonic music on the cembalo cromatico, and Wickham brought in expertise on performing musica ficta from manuscript parts. For each perspective, performers were involved to artistically demonstrate specific arguments and points. 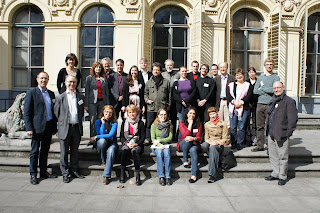 
More information on the details of this year’s incarnation can be found on the relevant Orpheus Institute webpage. Particularly worth highlighting here is the way Lindley’s case was the more perfect demonstration of the difference between music theory and ‘music & theory’, ultimately including how music theory can impact artistic research. His first lecture delved into the interpretative nuances that different meantone temperaments can offer the performer in scores by French harpsichord composers such as Couperin and Rameau, building strong cases for how the composers had played with this potential when composing. A pregnant example I found to be Louis Couperin’s passacaglia in g minor. Depending on the tuning, the Eb-G third in the third bar resonates by the greatest number of beats per seconds compared to the other, more ‘dead’ thirds. The potential for the harmony in the third bar to ‘open up’ has obvious implications for the way the performer builds the sequence in this opening phrase.

Extending the modus operandi to Bach, Lindley devoted his second lecture to the implementation of a tuning of his own devising on the first book of Bach’s Wohltemperirte Clavier. A regular theory conference would have had to take note of the unsettled dispute between Lindley and Brad Lehman. The latter also devised a particular temperament for Bach’s masterpiece, based on a perceived indication that Bach himself would have integrated cryptically into an ornament of the manuscript’s frontispiece. Both scholars vehemently defend their ground (read about it in minute detail here), but in the framework of the Orpheus Academy, this debate is besides the point. Lindley had asked for two contemporary pianos, one tuned to his system, the other in equal temperament. Performing preludes and fugues (Lindley, with the help of pianist Cecilia Oinas), Lindley convincingly demonstrated how mean-tone temperament (his or someone else’s) has a compelling influence on the performer when making decisions about phrasing, articulation, even about the general aesthetics of the interpretative approach. Beyond the insight that equal temperament has almost destroyed our ears (eminently warned against by Ross W. Duffin, and experienced by every participant of the Academy who needed to strain the ear to adjust to the nuances that sometimes only Lindley seemed trained to hear), the ultimate point Lindley impressed his audience with was how a present-day pianist need not become a harpsichordist who tunes his own instrument: awareness of these fine nuances and how they relate to tonal character is enough to inspire the interpretation of a pianist, even when s/he plays on a well-tempered instrument.

The papers will be issued as part of the ongoing series Collected Writings of the Orpheus Institute (see here for previous volumes). Next year’s Academy will treat experimentation in the 19th century. 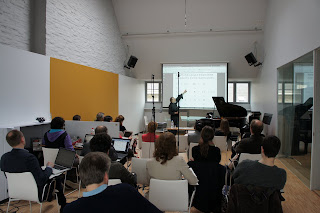