Towards a European Platform


For two and a half days, the European Association of Conservatoires, Music Academies and Musikhochschulen (AEC) set up shop in Belgrade to discuss AR. Sounds, Searchings, Sharings: towards a common platform for the development and dissemination of artistic research in music was the inaugural conference of EPARM, a project of the AEC to


serve the community of European conservatoires as they come to terms, each in ways most appropriate to their unique context, with the phenomenon of artistic research in music

(joining other AEC platforms, e.g. for Jazz and Popular music or for Early Music). EPARM was formerly known as European Network for Artistic Research, initiated in  2009 by the Orpheus Institute.

Over 100 people were registered to represent 54 institutions from 24 countries interested in AR. That is about 1/5 of the member institutions of the AEC, from about half of the countries that the AEC covers. The top three of heavily represented countries included Belgium (7 institutions), The Netherlands (6) and Sweden (4). It was odd to notice how the UK only revealed one interested party (Royal Northern College of Music) and that the Sibelius Academy did not send anyone - both are as well-known for their tradition and/or efforts in the realm of AR as any in the top three. The Balkan region, on the other hand, showed great interest, but it is unclear how much of that had to do with the geographical location of the conference compared to their actual or projected involvement in AR.

The hallways and rooms of the hosting Faculty of Music at the University of the Arts in Belgrade were buzzing with the energy of intent: policy makers and researchers from diverging individual and national backgrounds made their focus and involvement clear during all of the many presentations. Keynotes included the perspectives of a “successfully graduated doctoral student” (yours truly – still wondering if there is an unsuccessful way to graduate), of the rector of an institution (Georg Schulz, of the University of Music and Performing Arts in Graz), and of those pondering the framing conditions and curriculum building for AR in conservatoires (Massimo Zicari of the Scuola Universitaria di Musica in Lugano and Jeremy Cox, ceo of the AEC).

In between the thematic sessions, 10 composing, interpreting and improvising doctorandi from AR programs in Malmö, Paris, Ghent, Stuttgart, Belgrade and Trieste presented their ongoing ‘solo’ or collaborative research. Once more (cf. my previous post on AR at the Masters level), the diversity of personal artistic curiosity and the resulting research angles was exciting and inspiring, with projects ranging from the Arpeggione to the electric viola and from improvisation in opera to processes in the relationships between performer and composers. The conference reader and some of the presentation Powerpoints can be downloaded here.
The organisers and sponsors (see the reader for details) have gone out of their way to provide maximum conferential comfort. From the technical assistance to the framing entertainment program (including a concert by the Belgrade Philharmonic Orchestra and an evening-long dinner on a boat cruising the Danube), the entire production was imacculate.


The quality and identity of the research was not always discussed as collectively as some later indicated that they would have liked. Despite the humidly warm conference hall, or because of it, debates never heated up to the point that new ideas were forged. Unnecessary fears about having AR distract musicians from their art (or conservatories from their core business), unjustly perceived antagonisms between AR and musicology, hesitance in aiming exclusively at a full-blown AR PhD (thinking of allowing for a DMA-type performance degree as an option or even a substitute), confusion about methodology and identity, worries about the difficulties of standardizing institutional relations between arts and sciences across the EU,… The many challenges ahead (and we can identify a few more than those that were mentioned) may have pulled the symbolism of the confidently sunny early spring climate into the shadows a bit, but the general feeling remained very much that of blossoming determination, as demonstrated by the suggested constructive reasons for initiating further assemblies to look at financial issues, to include trans-ethnic potential, to continue to explore methodologies, etc. It came as no surprise, then, that the closing plenary discussion resulted in a unanimously supported proposal for continuing and broadening the efforts towards “a future for a European platform for AR in music”. 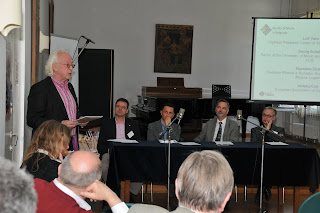 Closing plenary discussion with Frans de Ruiter
sharing aspects of more than a decade in AR experience
Posted by luk at 7:59 AM