The two-day seminar gave the floor to 13 speakers, mainly from  the UK and Scandinavia (one from Belgium and one from Chili), among which improvising and reproductive performers as well as composers handling their own works. The organizers evidently took care to treat the widest possible range of historical and aesthetic vantage points: contemporary and historical jazz and an extremely extended range of classical composed music (from Léonin and Pérotin through Palestrina, Monteverdi, Schubert, Chopin, Liszt, Schumann and Ravel to Lachenmann, Kurtág and present-day compositions) were set off against more esoteric concepts as ‘ecosonics’ or silence in computer music performance. (The complete program can be downloaded from the bottom of this page.)

The audience of more than 40 researchers – again demonstrating varied backgrounds and expertise – filled the conference hall to the point where the gathering alone promised satisfaction: crowded but cozily collective, with diverse interests merging into focus and opportunities for debate and networking ready to happen.

It is never difficult to detect the naturally gifted conferenciers: regardless of how their story relates to the listener’s reason for being there – if it even does – they succeed in taking you with them through their efficiently set-up argumentation and compelling rhetorical command. In that respect, the balance between the excellent and the less inspirational presentation was not out of the ordinary in this conference. As the order felt almost ‘cadential’ in the way that it seemed to efficiently time the necessary contrast between the dry and the entertaining, it was never really frustrating to see a less experienced speaker miss the opportunity to fulfill the potential of his topic, or to watch the most talented keep the audience on the edge of the seat beyond what the content of his contribution merits.

Regardless of the solidity of the attention span that speakers were able to win from the audience, plenty of the contributed content was worth having been presented for its own sake. I doubt that anyone will forget the impact that the Swiss tenor Valentin Gloor made with the way he managed to establish a perfectly convincing  symbiosis of a lecture about an artistic research project with the performance of that actual project (in which he worked out concepts of association in a theatrically enhanced performance of Schumann songs). Personally, I was happy to get to be introduced by British composer Nicholas Brown to his compositions, enthusiastically welcomed the myth-busting research of Daniel Leech-Wilkinson into Cortot’s performance practice, and hope to learn more about where Christina Kobb’s as yet tentative hypotheses regarding early 19th century notation of micro-dynamics will take her (and current pianistic performance practical knowledge).

Due to illness and the reluctance to infect others, I stayed at home for the second day. This turned out to be an excellent circumstance, as I found myself reminded of the fact that ORCiM offers live streaming of its events. I did miss two presentations because the speakers wrongly assumed they didn’t need the collar microphone that would have enabled me to hear what they said, but it was a joy to benefit from this technology. Aside from the inability to pose any questions, the streaming offers an absolutely wonderful way to attend a conference without physically being there. Bravo to whomever thought of that! 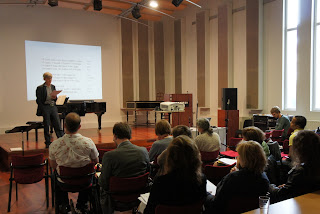 As much as the production and the content of the seminar left eminently memorable traces, it nevertheless was a disappointing surprise to realize just how few presentations really matched the promise that their title and/or abstract had held. In contrast to the ability of engaging an audience to the full, which is may be more a question of talent than skill, the way a presentation is made to be about what the description says it will be, is but a matter of intention. To an extent, it is understandable that researchers try and present their projects and findings at different conferences to test them for feedback, and invariably this means that the content must sometimes be bent a little to fit the theme of the conference. Certainly, some flexibility should be offered to facilitate this, and it generally is, but in this instance, such flexibility seemed to have been assumed by some presenters to stretch across an all too wide gap between the theme and the presented content. Many titles incorporated the term ‘experiment’ but very few went on to say anything about experimentation. One presenter dug into the etymology by way of introduction, continuing only to leave it undeveloped. For most, it seemed just a word that needed no elaboration, and if the projects that they presented were to be taken as cases of experimentation, then I have witnessed mostly just that: cases of research that relates (more or less) to performance practice – not case studies on artistic experimentation. I have heard no one posing a research question on artistic experimentation and following it up by arguing his or her way towards any type of answer to that question. In fact, hardly any of the presenters took the opportunity to explore the perspectives and the 8 research questions that were offered in the call for proposals as possible points of departure, as intriguing and as begging for treatment as they are. Some presentations could be defended as being about experimental practice in the performance of early music, but not as “revealing experimental performance practices from the past” (all italics are mine); I did not see a presentation handling “a practical approach that takes the 'skilled body' as its point of departure“. Only the broadest “open-ended approach that challenges state-of-the-art practices in the field of music performance“ was recognizably present in some of the presented material. One presenter did clearly start with one of the proposed questions in mind – “How does experimentation 'between' performances (from performance to performance) work?” –  but this was not worked out to move towards any defined insight. There was certainly chamber music in the mix, but we did not learn “How experimentation [works] through collaboration (e.g. chamber music)”, whether “the use and influence of non-musical elements [is] an important factor in experimental performance practices”, of “the relationships between experimentation and improvisation”, on “How experimentation occur[s] in the daily practicing process”, or “What the tensions [are] between 'fidelity to the score' and individuation of performance”.

No conference convener can foresee how presenters will work out their abstracts into presentations, and there was certainly enough that made it worthwhile for anyone with any interest from any angle to have been present. On balance, the seminar invoked the urge to taste more – given ORCiM's long-range interest in artistic experimentation, we can be sure to be offered more.
Posted by luk at 2:47 AM