A move to put our mark on the Frascati Manual

According to its latest newsletter, the Society for Artistic Research wrote a letter to the Organisation for Economic Co-operation and Development (OECD), on August 30, to call for a revision of the Frascati Manual in order to add AR as a new and separate scientific category. (Posted on the society’s FaceBook Timeline on October 29, 2013.) 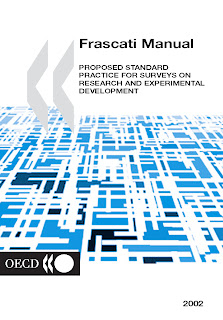 The Frascati Manual was thought of as initiating a “Proposed Standard Practice for Surveys on Research and Experimental Development” to measure Scientific and Technological Activities. Its latest (6th) edition dates 2002 and defines types of research and research personnel, deals with measuring expenditure and personnel resources, and also organizes the "Field Of Science" into main and sub-categories. (Buy here or download its free PDF here.) The book is highly influential: worldwide, governments and organisations adopt its definitions for discussing their scientific, technological and economical development policies, and R&D studies acknowledged its function as a standard.

The 2002 edition Field of Science classification was revised in 2006 (freely downloadable here) and is listed as follows:

The 6.4 Arts category is specified as containing: Arts, Art history; Architectural design; Performing arts studies (Musicology, Theater science, Dramaturgy); Folklore studies; Studies on Film, Radio and Television. (The 2002 classification saw 6. Humanities as made up merely from 6.1 History, 6.2 Languages and literature, and 6.3 Other humanities.)

The noble but bold request of SAR is to add AR not only to the classification as a new category, but to do so “as a significant category on its own terms.”  The 6.4 Arts category, as “containing various fields of research on art” [my italics] is juxtaposed with the claim that “this classification does not in any satisfactory way reflect the development of artistic research” (i.e. research through art [my italics]). The letter’s phrasing – to see AR as “a field of its own on the 1-digit level” – leaves unclear whether SAR wants AR to sit at the 1-digit level (making it a 7th high-level group) or under it (as a distinct 6.6).

Next to the notion of the unsatisfactory way that AR would compare to the subcategories under 6., the society’s letter states several other reasons for its claim, such as the Frascati manual’s “aims to reflect changes in the nature of contemporary R & D” (the 2006 revision is indeed considerable), and two recent international initiatives to suggest a similar (1-digit position) solution to the perceived problem. Of the latter, one proposal (from the Head of the Economics Statistics department, Statistics Sweden and the Swedish National Agency for Higher Education) was made in November 2010, and the other (from European League of Institutes of the Arts) in January 2012. Both initiatives were addressed to the OECD Head of Economic Analysis and Statistics.

I don’t know if the two previous attempts were left unanswered, nor can I form a good idea as to how complicated it would be to realize a revision of the classification. The international scope of AR is lauded in SAR’s letter as being well networked an widely recognized, but how much of that will (or needs to) impress whatever entity decides over this, is a mystery to me at the moment. More interesting is the question of the validity of creating a new position for AR. I am all for recognizing AR as separate from musicology and artistic practice (see here), agreeing also in full that research on an artistic practice is not necessarily the same as in-and-through it (the latter can comprise the former, but goes one step further in catering conclusions to the needs of the practice). In my personal opinion and experience, it would also be good for AR to be valued as independent in order to safeguard some of the support that an emerging discipline needs. There’s hardly any money for AR (yet), and funding entities divide their financial pie into smaller slices rather than increasing the available resources as a whole to accommodate a new type of player. That there is already little cash to go around, is further mirrored in the facts that a call for an AR position attracts a significant number of interested musicologists, music-theorists or –philosophers, or that these scholars prefer a term such as ‘artist-researcher’ rather than one that identifies a new type that they feel (unjustly, I think) excludes them from participating. For the time being, I prefer to make clear distinctions, as attempts at appropriation (“AR is musicology with a new focus”, as I have heard argue on an AEC symposium a few years ago) will only leave dire chances for the young category to grow. A spot of its own in the Frascati Manual would certainly offer some hopes, if not guarantees, of being recognized, taken seriously and supported on government levels.

But, when reading in the manual (pp. 30-45) about distinctions on the borderline of what it considers to be at the core of the manual, i.e. Research & Development, and what it states should be excluded from R&D, then the matter might not be a small task. An example: “[…]even research by students at the PhD level carried out at universities should be counted, whenever possible, as a part of R&D[…]” (p. 31) [my italics] As it happens, doctoral AR is nearly all we have to show for, really. Fortunately, I am now only concentrating on music in this post – the visual arts have more weight to put on the scales. And for music, if all goes well, output streams can and will grow stronger, broader and faster.

On a conceptual level, however, tougher questions remain. As long as doubts are expressed as to whether or not artistic practice in itself is research, and artistic output be valid as research output, and as long as institutions consider a D.M.A. format (e.g. Portugal) for the doctoral cycle, or restrict doctoral candidates’ options to musicology departments (Germany), the communal AR efforts will stay diluted, and it may be hard to convince the OECD that we don’t fall under arts. And while I go along, to at least a certain extent, with the idea that AR can involve a type of knowledge of its own, I still see quite a few AR dissertations and articles being written that do not benefit from artistic practice, do not demonstrably have an impact on it, and do not bring forth new artistic knowledge.

In any case, I warmheartedly favor SAR’s proposition, and I look forward to hearing of any development in the matter – will keep you posted here.